A little bit of Doctor Who, today.

Eleven is my doctor. Of course, I loved Nine and Ten as well, for different reasons – Nine was the oncoming storm, born out of the rage and sorrow of war. Eccleston’s performance was very raw, and yet at the same time very whacky. I loved series two and three with Ten and his angst and his craziness, wanting to be human so badly, but I feel that the writers overdid his melodrama and ego towards the end of series four.

But Eleven – he is everything that I would want in the doctor. Rather than being the angsty teenager Ten was, Eleven revels in his alienness. He’s the teacher, mentor and crazy professor figure, wanting to show others all of time and space, which for him has become only a backyard. He’s older and wiser, but there’s also a darker edge to him. He’s manipulative and is capable of rage (something all the doctors are capable of, really). Eleven’s is a quiet kind of rage, which simmers and bubbles before exploding. Look at the end of The Beast Below: “Nobody human has anything to say to me today,” and that small sentence in The Impossible Astronaut where he tells his friends “don’t play games with me. Don’t ever think you’re capable of that.” We know that Eleven is not scared of changing the way things are, which he only recognises, I think, when it’s reflected back at him through River. It’s an understated darkness, which I think is all the more powerful for it.

And he’s capable of genuine warmth and comfort. Ironically, he’s most human in his complete alienness. And of course, he’s hilariously funny and geeky; his comedic range and laugh-out-loud, witty lines are incredible.

But what I really want to talk about in this post is Eleven as asexual – something we see quite clearly in some scenes and episodes, such as Amy’s attempted seduction (which I maintain wasn’t really meant for anything serious), the “get a girlfriend, Jeff” type comments, the obvious (and endearing) awkwardness of that kiss at the end of Day of the Moon.

And there we get to River Song.

I love River Song to bits. I have a couple of issues with her characterisation (backstory mainly, you know), but most of them I can look over simply because we don’t know the whole story yet, and probably never will. There’s so much more to her than we can see at the moment. But the question is – does the Doctor’s relationship give him a sexual identity rather than an asexual one?

It would depend on how you characterise their relationship. The most obvious reading to me is that Eleven does actually fall in love with her as he gets to know her better – what’s not to fall in love with? Post-Wedding of River Song, they’re two individuals on pretty much even footing. They both have made mistakes, they both have complicated lives and complicated pasts, they both rely on each other in different ways but still have independent lives. I think Eleven feels a great deal of responsibility towards River as well. But I think he does fall in love with her, before TWORS, with the adult River. And how could he not love her completely from then on? 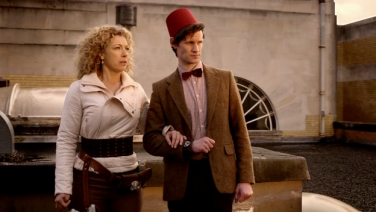 The Fez and the Hair: non-sexual relationship?

But I would still argue that Eleven is asexual. Or at least, demisexual.

For anyone not clued-up on shades of asexuality: asexuality is a lack of sexual attraction (but not necessarily romantic or emotional attraction – asexuality distinguishes between different types of attraction). Demisexuality is when someone gradually becomes sexually attracted to someone, but only after having been in an emotional/romantic relationship for some time. It’s not uncommon for asexual or demisexual people to have relationships with sexual people, either.

We know that Eleven and River have a relationship of some sort. We don’t know if it has a sexual component – for all we know, the line might be drawn at kissing. River has been coded as sexual pretty clearly, but there’s nothing saying that a relationship between them would necessarily be sexual. Eleven to me shows clear signs of emotional/intellectual/possibly even romantic attraction to River from The Time of Angels onwards, and we can see he’s getting a little bolder every time he meets her, enjoying her flirting and even flirting back. (Back-to-back, gun-holding flirting? Best flirting ever, and I can’t stand flirting in real life.) But to me, he’s still at least demisexual, if not completely asexual. And even if we’re shown evidence of a sexual relationship in the future? I’ll still think so. Plenty of asexuals have sex. It’s just the sexual attraction that’s not there. It doesn’t mean Eleven’s not capable of love, because I believe love does not have to include sex.

Eleven’s asexuality is part of why I love his incarnation so much. It’s a bit of a pity that even though there are quite a few asexual characters in television, they’re never explicitly stated to be such – but even just as it is, it’s a little bit of visibility for anyone giving it a bit of thought. And visibility is what asexuality continuously needs.

A note on comment moderation: this blog is a safe place for all sexualities, especially asexuals and all its shades of grey. If you want to disagree with my interpretation of Eleven as asexual, I welcome it – but I will not put up with intolerance towards asexuality as a sexual orientation.

22 thoughts on “The Eleventh Doctor as Asexual”