My hair and I have an interesting relationship.

It’s changed a lot over the past few years as well, which is why I thought I’d post about it today. It’s quite funny how hair can be a marker of lots of different things, including major life changes. For me, confidence has been one of the things my hair has helped me with.

As a teenager, I’d always had long hair. It was blonde and down to my waist and puberty made it go wavy and frizzy, whereas it had always been dead straight before.  There was a lot of it, and it was hard to look after. Once I got head lice, as you do in school. It was a nightmare, and luckily I’ve never had to go through that again. As it happens, I ended up wearing it in a plait down my back most of the time, or in a bun, because wearing it out was simply too impractical.

At the same time, wearing my hear out was the only way I could make myself feel beautiful as a teenager – so I really didn’t feel pretty much. Some people hide behind their long hair, but I never got the chance to, even though I hated the way my face looked. I couldn’t smile for photos, I thought I looked boring. I was shy and a bit stand-offish as a younger teenager, and that didn’t help either.

Don’t get me wrong, I didn’t loathe looking at myself in the mirror or anything. I didn’t really care what I looked like most of the time because I didn’t care about other people much. But I still managed to internalise that prettiness is something to aspire to, and that somehow I didn’t fit into that concept, because my face was so boring. I didn’t hate myself, but I wasn’t really very confident about myself either, at least not in this respect.

When I was seventeen, in the middle of my final HSC exams and in a bad place emotionally for other reasons, I chopped it all off.

I’d been playing with the idea for a few months, but was too scared of losing the one thing that allowed me to feel secure in my appearance every now and then. But then I got myself into the weird state of exams and finishing school and generally being a teenager having an existential every three days, and chopped it off. Not myself, I actually went to a hair-cutting place. But then one day I showed up at home with hair just below my ears, and it was so different that my younger sister thought I was some new girlfriend of my dad’s from afar.

The difference it made was amazing. Suddenly I had all this hair around my face, that I could leave out and not have to tie back! (It was actually too short to tie back, so I had no choice.) People were complimenting me on my new hair cut! I could look into the mirror and not grimace, because the short hair suddenly made my face interesting instead of boring! It seems like such a shallow thing, but the boost in confidence I got from cutting my hair short was incredible.

So I travelled around in my gap year, and worked, and then started uni, always keeping my hair shorter, and even experimenting with it rather than being afraid to touch it. One time I went into the hairdressers at uni and just told them to do whatever they wanted with it. (It ended up being two centimeters long at the back of my head and longer around the front, which was cool.) I even started taking pictures of myself! 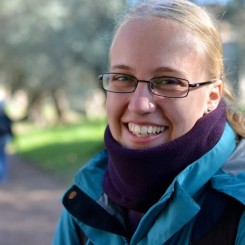 Yup, and after a while, I even started pulling my hair back again, because I wasn’t actually afraid of my face anymore. Or of looking at cameras.

And now, I feel confident enough to even grow my hair out again, even if I’ll end up wearing it up more. I’m more confident now, and less insecure about the way I look. I’m less concerned with my own thinking about appearance – because while I care even less about the way I look to other people, I’ve also realised that wanting to look pretty isn’t in itself a bad thing. And I want to be able to recreate Agrippina the Younger’s hairstyle.

So the moral of the story? Maybe I just grew up. But sometimes, hair and confidence can go hand in hand. And then, eventually, you realise that you don’t need the hair to be confident anymore.

One thought on “My Hair”